Monday.  Cold.  Rain.  Sounds like a recipe for a quick update on what’s happening at our old island home.

Last week we finished all of the outstanding little demolition projects – the rear deck is now gone and cleaned up.  Not much to show from there, but we did find a couple of old things under the deck. 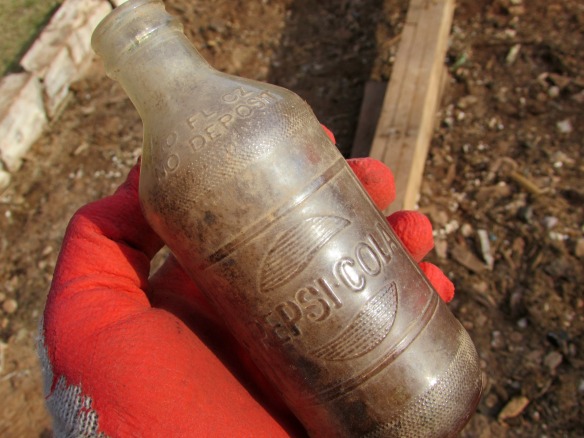 That’s kind of cool – but I have no idea how old it is.

While the weather was on our side, we also got the front porch off and cleaned up.

We covered the areas where there is no siding to keep the weather out for the next few weeks – both on the front and the back of the house.

Vanessa’s also been busy tending the compost piles as well – mixing the fresh manure in with all of the yard waste and grass clippings.

The manure is too green to add to our garden at this point – it will need some time to further breakdown before use.

And finally, the last of the chimney was removed.  We had already removed the portion through the roof, the attic and the second floor level.  To remove the remainder on the main floor, we erected some dust containment in our Living Room (future Dining Room) 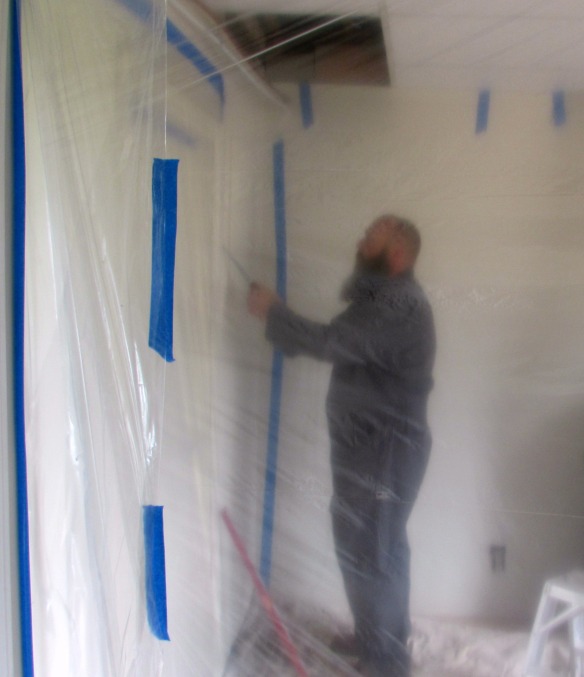 and opened up the wall to expose the bricks.

Then, like above, remove the chimney brick by brick.  Fortunately, unlike upstairs, we could just toss the bricks out the window as they came down making our cleanup and project quick and painless.

So with that said, today the last dumpster we’ll need for a while has been taken away.  It’s nice to have our driveway back – for the first time in almost four months.  But here we are – everything done to date in anticipation of our house being supported, lifted off the old foundation and having a new foundation built underneath.  Today we rest, because later this week…. 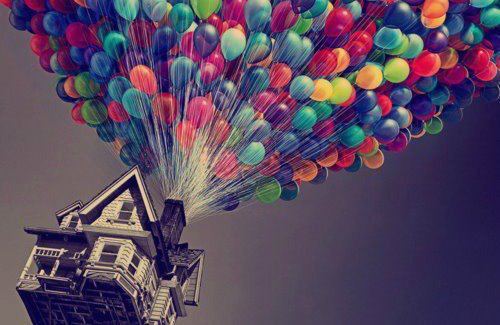 That’s right – all of our prep work and anticipation is coming to a head.  Tomorrow we enter a new and exciting phase in our renovations.  For the next three weeks or so, we’ll be focusing on some of the outside projects because our house will be up in the air with excavation and foundation happening below.

So, that wraps up this uncommon beginning-of-the-week update, but safe to say, we’ll have much, much more to report as the next few days and weeks progress.

Excuse us while we go do our happy-dance.

It’s been a while since my last post, but we’ve done so much.

I sit here trying to collect my thoughts and put something to paper, but frankly, I’m exhausted.  My body aches and my brain is foggy, so I think this post will rely heavily on pictures and quick captions to let you know what we’ve been up to the past two weeks.

We’ve really taken advantage of the beautiful weather and the longer days.  Now that it doesn’t get dark until almost 9:00, we’ve been putting in some long hours to get the last push done before the foundation starts. 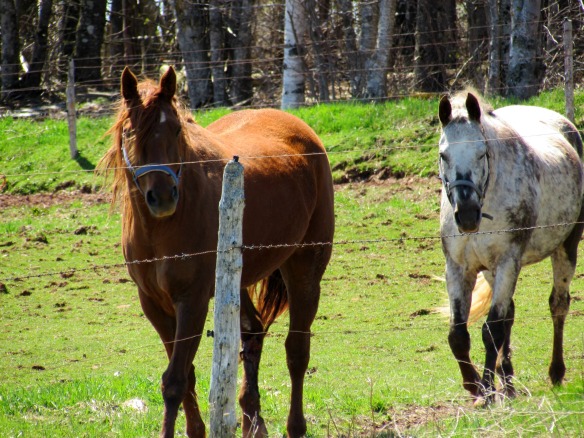 Under the watchful supervision of Jill and James

My last post showed the removal of the chimney above the roof.  Since then, we’ve removed the remainder of it from inside the house. 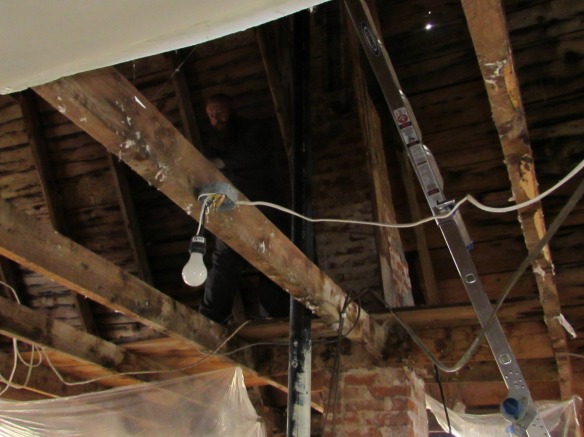 With a little help from the air compressor and an air-hammer, I made quick work of busting it down, brick by brick.  Vanessa sorted and stacked the bricks we were keeping for reuse elsewhere.

Then we turned our attention to outside – the addition. We started with the roof and worked our way down.  Nothing overly complicated, just a lot of effort and grunt-work.

Strip off the roof, remove the roof boards, wall sheathing and framing.  The demo took longer than we originally anticipated because we did decide to salvage as much of the material as possible. 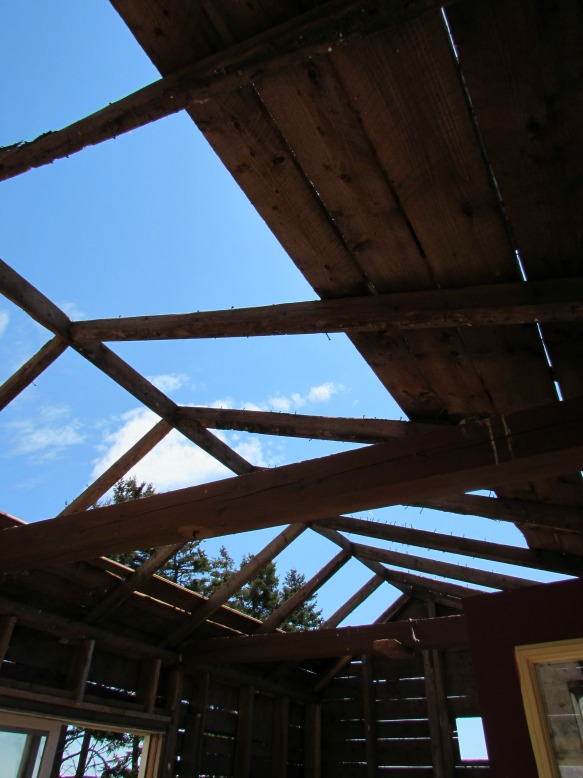 Rather than “grip-and-rip”, we dismantled everything, cleaned, sorted, denailed and stacked the material for our new garden shed/chicken coop that we’ll be building later this spring.

We’ve also been cleaning up the yard in anticipation of our vegetable beds and gardens.  We picked up several wood pallets from the building supply store for free (the best kind) and built a couple of garden composters.

We’ll still have a few more to build around the garden, but it’s a start.  Our neighbor was kind enough to give us some poop, too.  Well, his cow’s poop to be exact.

We’ve got our blueberry, raspberry and blackberry bushes, as well as two cherry trees, a pear tree, three cherry bushes.

Our Honey Crisp apple trees should be arriving soon as well.  Our little grow-op has been a tremendous success this spring – the best ever, actually.  The only problem we’ll have is deciding how many of these little guys make it into the garden. 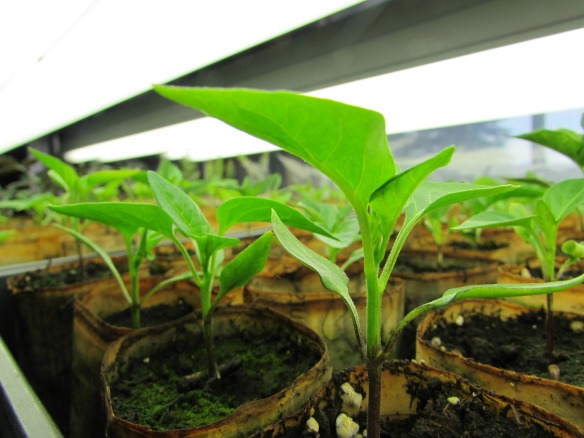 As you can tell, I haven’t the energy to put into this tonight – my apologies – but I also didn’t want any longer to pass before updating you on our progress.  So before I face-plant into the keyboard, I wish you al. bjhbsk rch p ccczzzzzzzzzzzzzzzzzzzzzzzzzz.

I thought that would get your attention.

There it is. Up on the roof.

Now before anyone calls PETW (People for the Ethical Treatment of Worms), I didn’t actually consume an earthworm.  It’s a metaphor (or a simile….or is it an onomatopoeia).  Sorry, English class was never my strong subject.

No – it’s a metaphor.  Imagine you’re on a long journey and you’ve reached a point where the only way you can progress any further is to eat a worm.  That’s where we found ourselves this week.  I had a worm to eat and there was no putting it off any longer.

With our foundation guy ready to start in the next couple of weeks, I need to get the old chimney torn down – and that means starting at the top.  I haven’t been looking forward to this.  Not by a long-shot.  And excuses have been easy: “too cold”, “too windy”, “too much snow”, “still lots of time”, “I’m too hungry”, “I’m too full”, “my nose is itchy”.  You know how it is – lots of reason to not eat this worm, but it needed to be done. 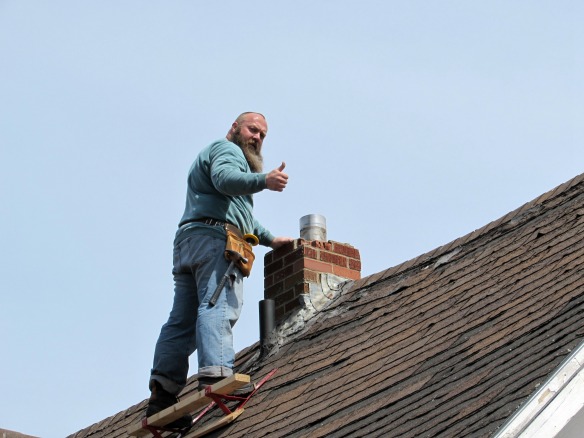 So far, so good

Today was the day.  The sun was out, the roof was dry and the winds were calm.  The weatherman is calling for rain for the next few days – so here we go.

I had to build some “steps” just to get some traction on the steep roof.  I tried a few times to just scramble up to the ridge but couldn’t get any grip.  These cleats gave me something to climb on, but needless to say, a 13/12 roof slope is still hard to get up.  That’s more than 45 degrees.

I’ll be honest, it’s not the heights that bother me – it’s the risk of falling.  Duh, right?  Seriously though, I’ve never had an issue with heights – bridges, buildings, CN Tower – no sweat.  There’s no risk of actually slipping overboard.  But perched up on the roof, swinging a hammer with nothing but the chimney you’re knocking down to hold onto? 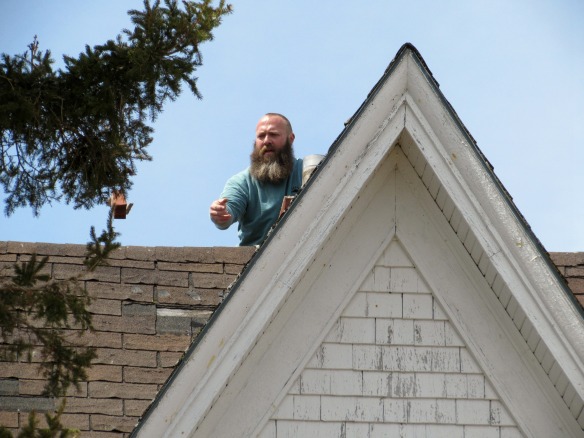 Not pictured: a happy guy

Here’s the part where I say: it’s now done, I’m safe.  The chimney is down below the roof line and the hole is patched in until the foundation is done, then the roofer can do his thing.   I didn’t mention previously that I’d be doing this this week – my Mom’s reading this post afterall, but needless to say, I’ll be grounded on terra firma for the next while.

Quite a view, though

With the roof now enclosed, we’ll be spending the next couple of rainy days taking the remaining chimney down from inside the house.

We’ve got the rear addition completely gutted now and the shingle siding and trim removed. 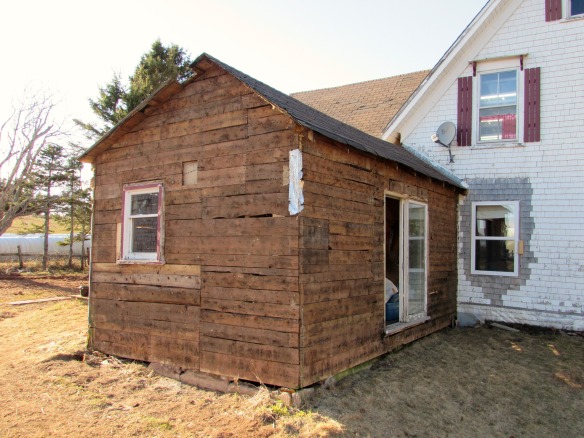 So the plan is to remove the chimney when it’s raining, and when the weather’s good, we’ll dismantle the remaining portion of the addition.

Vanessa’s been busy cleaning up the yard – raking up the old dead grass and straw – and burning whatever we can – including the cedar shingles from the addition. 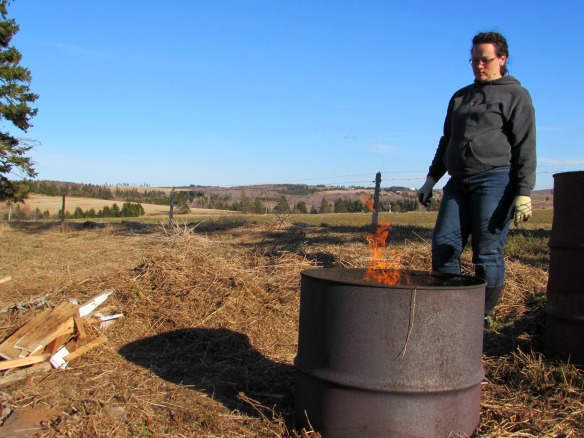 Murdoch’s been enjoying hanging out with us while we’re outside, too.  It’s been a long winter for him as well.

Enjoying the shade of the barn

So, back to my original point: how do you eat a worm?  You just close your eyes and swallow.  Unless your “worm” means getting up on your roof.  In that case, I’d suggest keeping your eyes open.

Not so tough now are you, chimney?