Well we survived our visit from Arthur – the first Atlantic hurricane of the season – although it was downgraded to a Tropical Storm by the time it hit the island.

We lost power last night and have been without for about twelve hours now.  (Note: I’m currently writing this blog entry in my notebook to be transferred to the computer once power is restored).

We’ve only been without power for a few hours now, but it certainly drives home the point of how reliant we are to the grid.  Since we’re so deep into the renovations, and we’re going to rewire the house anyhow, I’ll be hardwiring a few critical circuits to run off a generator if needed – the fridge, well-pump, a few lights and plugs, etc.  Nothing extravagant, just enough “juice” to get us through a lengthy blackout if needed.  With a well, no power means no water.

Not that we had any issue with this storm – there was lots of advance notice of the impending hurricane.  We had filled a couple of water containers we use for camping with water – and the bathtub as well.

So other than the power outage, we came out of things unscathed.  The roof was finished on Friday – one day before the storm hit….

….and thankfully we didn’t lose a single shingle. 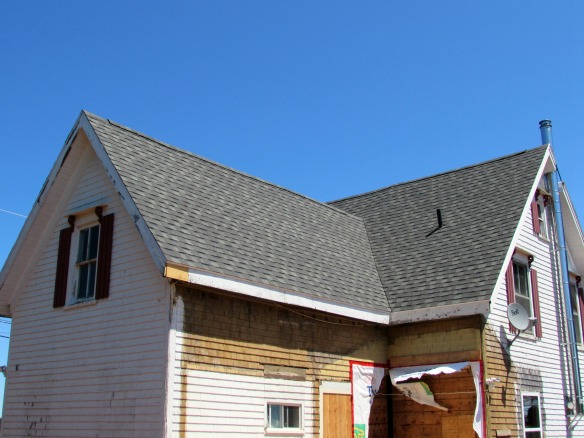 Not to say the house didn’t rock in the strongest wind gusts – because it certainly did – but there were no significant issues.  I’ll admit it was pretty unnerving how the house shook in the strongest gusts – probably made all the worse because the house is completely gutted on the second floor.  One gust tore off the Tyvek building wrap from the exposed area on the back of the house and it’s now M.I.A.  The way the wind was howling, I suspect someone in Prince County is picking it up from their yard today.

Before the storm came, I closed in the floor of the addition to prevent and wind from gusting through the basement.  We didn’t need the basement filling up with water before the concrete floor gets poured, either. 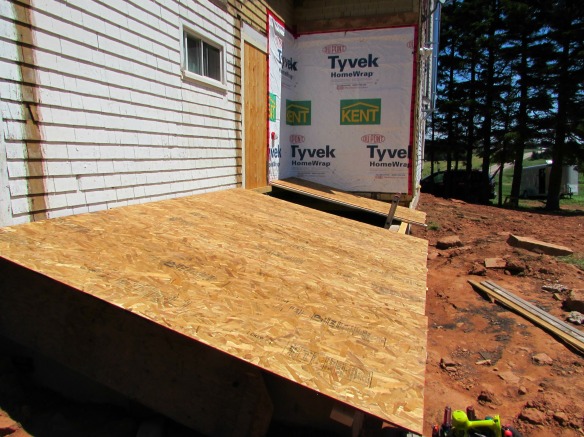 So suffice to say we’ve now got our work cut out for us.  Everything we’ve been doing to date has led up to this moment.  The demolition was in anticipation of the new foundation.  The new foundation allowed us to get the roof re-sheathed and shingled, which now allows us to finally get the upstairs renovations underway.

In fact, we had a big lumber order delivery on Friday to start restructuring the attic floor, install the roof vents for the cathedral portion of the ceilings and rebuild the partition walls.  This week, we’ll be getting our clawfoot tub, shower unit and associated hardware.

But it’s not all work, no play either.  We had a surprise visit from a good friend and former co-worker, Skip and his beautiful daughter Brooke.

Skip and Brooke. Not an accurate representation.

They had an east-coast road trip planned and paid us a totally unexpected visit.  Skip was our lead-carpenter back in my Ontario life so I was tempted to shove a hammer into his hand when he walked in our front door.

Our work days have been lengthening as of late to get as much done as possible before our family arrives in August for vacation.  I’ve been preparing them that they shouldn’t expect the Royal York Hotel here, rather more like the Hav-a-Nap motel.  Either way, it’s going to be great to see family again and show them what we’ve gotten ourselves into.

In anticipation of their visit, we’ve been exploring the island ourselves for ideas to bring them.  Murdoch on the other hand is quite happy to just go to the beach.

Oh yeah, and to wrap things up, my birthday came and went.  We just did a small celebration this year….

Oh, wait.  That was Canada Day in Charlottetown.   For my birthday, we just sat in the dark.