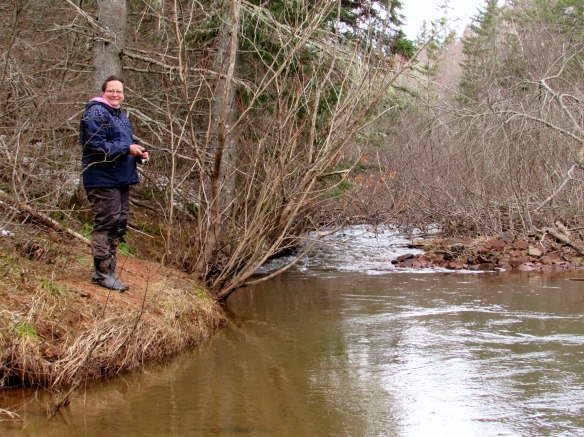 A few weeks ago, Vanessa and I enjoyed a series of six weekly “get to know you” evenings with our pastor and a few new couples at our church. One week we were asked: if money were no object, how would you spend the “perfect” day off? I knew exactly how I’d respond: I’d be sitting by a stream – fishing rod in hand, enjoying a beautiful day in solitude, enjoying the beauty of nature around me. Actually catching fish would be optional bonus.

With an endless array of freshwater streams rivers and ponds, there is no shortage of fishing opportunities for us in PEI.  Most of the rivers are short, spring-fed streams that originate from cool freshwater springs providing a near-constant flow of 6 to 7 degree water throughout the year.  As a result, these streams support a good trout fishery.  In particular, it’s said that brook trout can be found in nearly every stream on the island. 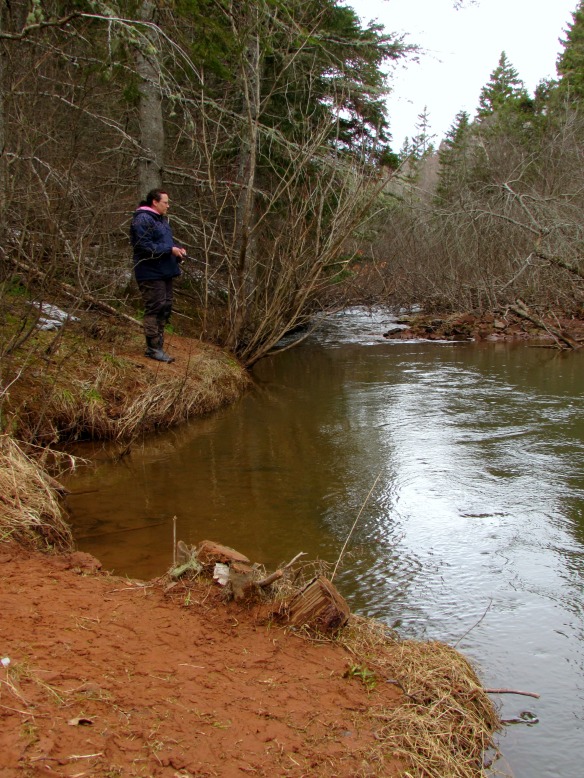 In addition to the brook trout, Atlantic salmon can be found migrating on a few of the larger rivers on the island, and rainbow trout (a non-native species) have taken to a number of rivers and are now a self sustaining fishery.

We had previously fished a couple of ponds around our house without any success so we decided to try a river just minutes from our home.  On Sunday, we had scouted an area of the river when we took Murdoch for a run.  It wasn’t long before we saw big shadows just under the surface and a few fish rising.  That’s exactly where we headed on Monday morning.  And like Sunday, the fish were there to greet us.

We tried the go-to presentation for river fishing: drifting worms.  Nothing.  Then I switched to artificial trout eggs with the same success.  Perhaps a nymph fly pattern?  Nope.  And to top it all off, our presence likely spooked the fish – they were now nowhere to be seen.

The one thing about this location was the deep pool just upstream from some fast-flowing rapids.  Any fish heading upstream would take some time to rest in the slower moving water of the deep pool.  That’s what I was telling myself, anyhow.

I figured the fish were there – we just weren’t offering them what they wanted.  So, I tied on a lure I had some success with back in Ontario – a tiny streamer I tied on a 1/32 oz jig-head.  On the first cast, I had a huge trout chase it into the open.   My heart was pounding.  Another cast.  Another follow.  I could hardly believe it.  Another cast.  I saw a flash of white as it swiped after it….and missed.  Fourth cast.  BAM!  Fish on!

My first PEI trout – a 16″ rainbow trout.  I noticed the yellow tag on it’s dorsal fin.  The University of PEI is undertaking a rainbow trout study to monitor it’s habitat and possible expansion into other watersheds.  Rainbow trout were introduced to the island accidentally when a hatchery malfunction resulted in the mass escape of a steelhead strain of rainbows.  I noted the tag number and released the fish. 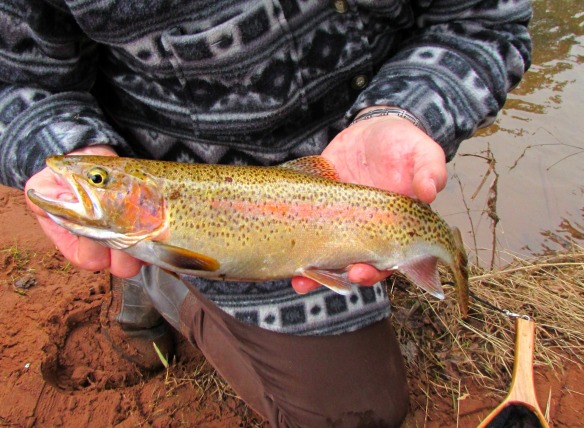 There is a UPEI hotline to call when a tagged fish is captured.  Simply note the tag number, the size if the fish and the location of the capture.  Your report is even eligible for a reward.

Fishing continued for another while, but this was the only fish that little jig would catch today.

Time to regroup.  Clearly the fish didn’t want worms or eggs.  I did get one with a minnow-imitating streamer, so let’s go with that.  I tied on a small floating Rapala plug, tossed it downstream swam it over the deep pool.  This time it only took three casts.

My second fish – and probably the biggest river-trout I’ve ever caught – a 22″ rainbow.  I didn’t want to keep it.  Vanessa did.  We kept it, but to be honest I wrestled with that decision.  I hate the thought of keeping the big, brute, breeding-stock. 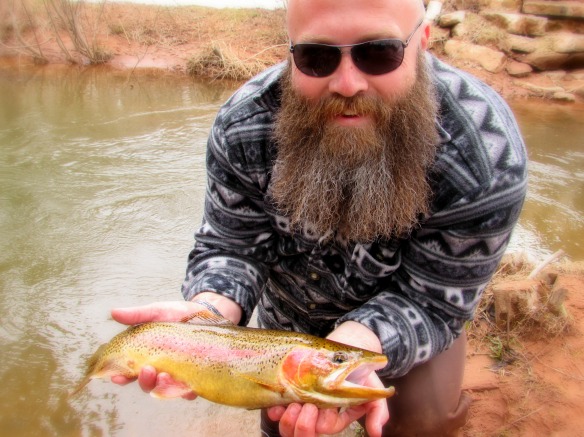 It was a male – not a female capable of still laying thousands of eggs.  If it were, there was no question – she’d go back.  And it was a rainbow trout – a non-native species, said to be pushing out the native brook trout and Atlantic salmon residents.  So, I agreed.  It would become dinner that night.

Fishing continued again for a while and we didn’t have much more luck with any of the other lures we tried.   It was getting colder and I really wanted Vanessa to catch one before we left so I tied on a spinner with rainbow trout colors.  I figured if the fish got annoyed by a little trout buzzing around, we might get a strike out of anger.

On her very first cast with this spinner, Vanessa had her first island trout: a perfect pan-sized rainbow. 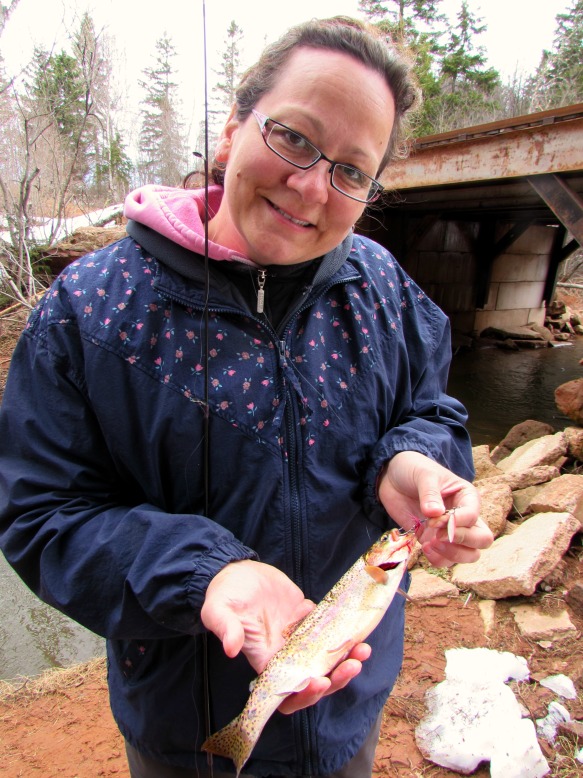 And that’s where it ended up – in the pan.  No hesitation.  In fact, given the option, I’d rather keep six of these little guys over one of the big ones.  The big ones may be more fun to catch, but the little ones come guilt-free when eaten.

So that’s how our fishing trip went.  A rousing success, I think.  And being only minutes from the house, a place I’m sure we’ll frequent again and again.

So once home, I cleaned both fish and the little one went right into the fry pan. We split it as a snack while I prepared supper.

Very few of you know that I really enjoy cooking.  I love it actually, so I wanted to be sure the big trout we kept was enjoyed to the fullest – the fish deserved that at least.  It can also be a real challenge when cooking for a non-fish-eater.  I’ll give credit where it’s due, though – Vanessa has eaten more fish since coming to PEI than in the previous twenty years we’ve been together.

I froze one of the two big fillets.  The other was baked with a lemon-dill butter and served with an apricot and almond pilaf. 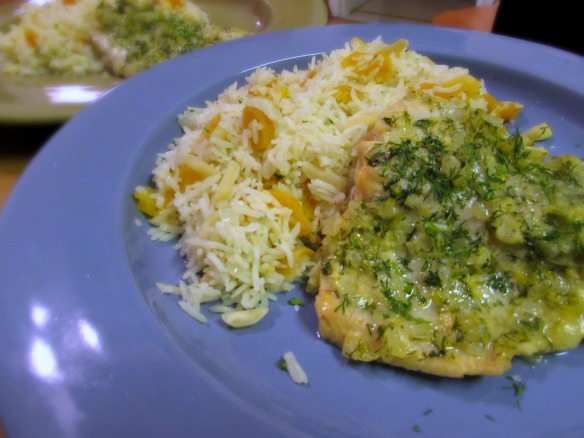 So just like the fishing, it too was a success.

5 thoughts on “From river to plate: catching dinner”