And so it goes.  Gutting still continues on the second floor.  We’ve pretty much finished the interior walls and started dropping ceilings now.  That’s tough.  I mean ripping off drywall is one thing – but we have the original lath and plaster buried behind a layer of drywall that was also plastered over.  It’s all heavy and it’s all overhead.

It may seem tedious, but I rather remove a layer at a time, cleanup and dispose as we go, rather than rip it all down and try to clean up the “wreckage”.  It keeps the work area clean, and makes disposal much easier. 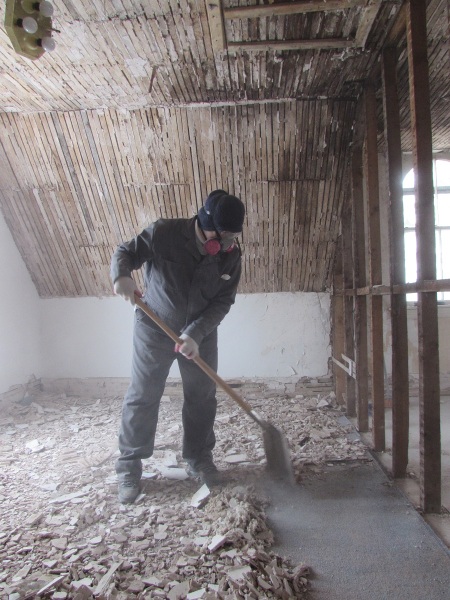 The drywall comes down in 2′ x 4′ sections – which we fire out the window into the front of the disposal bin.  The plaster comes down in pieces not much bigger than the palm of your hand – shovel that into buckets and send it down the chute.

Then pop off the wood lath.  We’ve thrown out a lot of the lath – most of it is damaged/rotten/broken.  Anything around 12″ makes great kindling for the woodstove – but we have saved the whole pieces.  I’ve got a few ideas to repurpose this reclaimed wood in our home.  I’ll keep those ideas close for now – but it’s safe to say it won’t be the last time you’ll see this lath in our house.

The plans I have for you….

Once we have the remainder of the ceilings down, the attic will be exposed in all it’s glory. 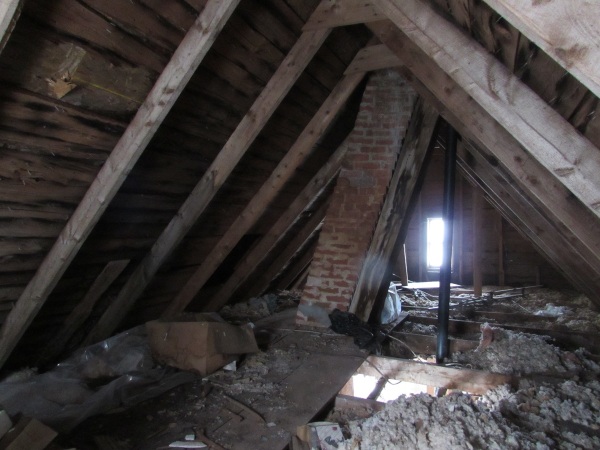 It’s actually not a bad space.  Although previously never used for anything but storage, I’m sure we can come up with a few ideas.  The brick chimney will be removed as part of the renovations.  It’s old, cracking and likely won’t respond well to being lifted off it’s foundation when we raise the house in the spring.  Besides, we’ve already relocated our woodstove to an exterior wall with a new insulated steel chimney/flue.  A bedroom is not an option in the attic as we won’t have room for a staircase (making emergency egress a problem) – but another use wouldn’t be an issue.  There’s plenty of room to walk around in there.  Perhaps a music room for me to practice without disturbing Murdoch.

“He calls that music?”

Needless to say, we’ve chosen a difficult path.  And it’s certainly not for everyone.  Demolition is dirty, heavy, hard work – but for us, this is a source of tremendous satisfaction. 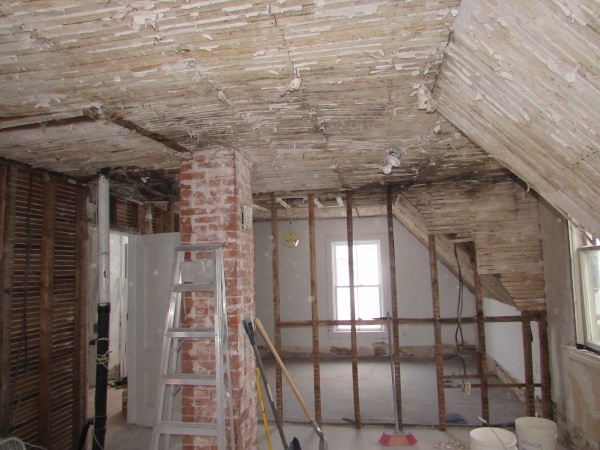 And of course, the full-home renovation is almost like building from scratch – you get to make the house exactly what you want.

I like what a friend of mine said recently: “you can judge a day by what it looks like when you blow your nose.”  Or in our case, “what you shake out of your respirator.”  It’s a dirty job – but I’m glad to do it.  Soon we’ll be up to our knees in insulation – I guess that’s better than all the horse hair they used to add to the plaster.